You have no items in your shopping cart.

Posted in REVIEW By Ern 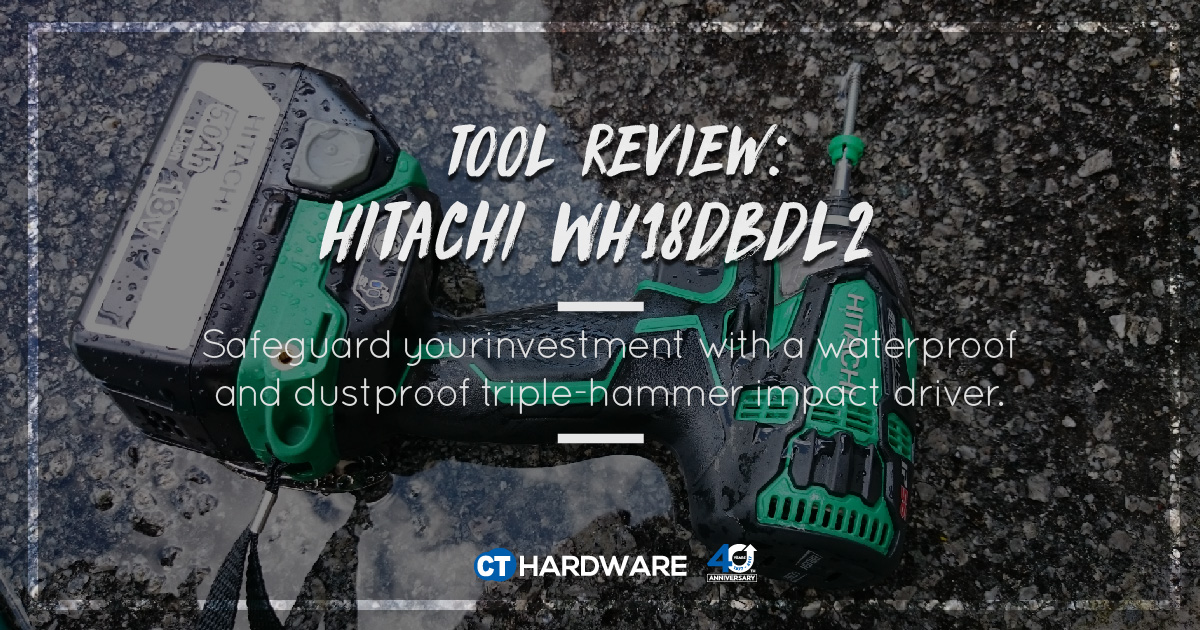 Hitachi Limited is one of those highly-diversified Japanese congolmerate that has its hands in just about every facet of the industry - from aerospace to military and probably even the hard disk inside your computer.

Despite the company's size and global presence, Hitachi's power tool offerings (through its subsidiary Hitachi Koki) are somewhat conservative when it comes to variations but what Hitachi lacks in variety, it makes up with highly unique tools - One such tool that quickly caught our attention is their WH18DBDL2 - an IP56-rated triple-hammer cordless impact driver with 207Nm max torque.

We know that a waterproof and dustproof impact driver might sound a bit gimmicky, but why would you want one?

A quick check with our CT Hardware Service Centre reveals that the number one cause of non-warranty related repairs is when your cordless tool goes for a swim or gets dropped in the dirt - obviously with greater cordless freedom comes greater responsibilities!

To be honest, if you treat your tools with care and plan ahead, you shouldn't have to worry about unforeseen circumstances of it getting damaged either through water or dust. Having said that, accidents do happen which is why at least one other tool manufacturer is also offering a water-resistant (but not IP-56 rated) cordless impact driver.

What does the IP56-rating mean?

The IP Code states that "5" means that the WH18DBDL2 is dust-resistant but isn't completely sealed against ingress of dust (as the motor still needs air to keep it cool). While the second digit, "6", means that the WH18DBDL2 should be fine against water jets, from all directions. The rating specifies 100 kPa from 3-metres with a volume of 100-litres per minute.

Hitachi's own tests uses fine talcum powder 75-micrometre (μm) in a test chamber for 8 hours and specifically states 100-litres of water per minute, for 3 minutes from a distance of 3 metres with a spray nozzle of 12.5mm.

Even with such rating, Hitachi goes to great length to state that there is no guarantee that the tool will not malfunction - here's why; 100 kilopascal (KPa) is only 1 bar while most home pressure washer typically output anything from 90 to 145 bar so if you happen to see YouTube videos of people hosing down their WH18DBDL2 with a pressure washer, then they've basically voided their warranty.

So what if you accidentally dropped the WH18DBDL2 in the water, dirt or mud?

In which case, you can simply remove the battery, rinse the WH18DBDL2 under a tap, shake off the excess water, re-install the battery and back to work you go. The entire WH18DBDL2 is sealed as can be seen at the rubber mouldings around the battery terminals at the base of the unit.

While the WH18DBDL2 itself is IP56-rated, the 18V lithium-ion battery that powers it is not. Hitachi does not make a splash-proof cover for their battery so you gotta get creative if you intend to use it in situations where the WH18DBDL2 might get wet - a piece of plastic and rubberband works wonders. 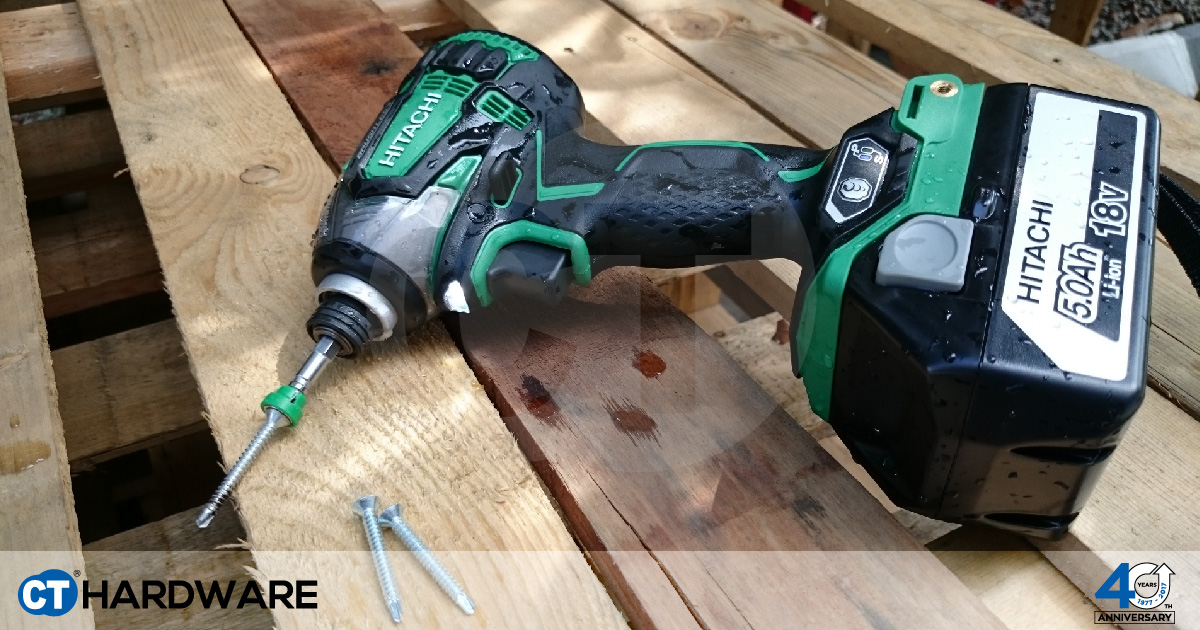 Despite its high-torque output, the WH18DBDL2 is very compact, well-balanced unit with a functional yet futuristic look that would appeal to the seven year-old in you. Save for the removable smoked cover, the entire green plastic body has a black rubberised overmolding that serves to provide grip as well as shock absorption for the tool itself. Weight-wise, the WH18DBDL2 comes in at 1,564g with a 5.0Ah lithium-ion pack and 919g without.

The WH18DBDL2 is so small infact, that you might accidentally block the air inlet ports at the back of the unit when you use your palm to apply more force on the back of the unit. Hitachi also included a non-removable nylon lanyard alongside the removable belt clip which can be positioned either to the left or right.

It even comes with perhaps one of the brighest LED light in the industry for a impact driver with with a very comprehensive switching options - always on, always off and an afterglow mode. Unfortunately, the remaining power indicator, is the standard Hitachi two LED indicator - two bars for full and one for 50% charge.

In conjunction with its has four power mode; Soft Mode, Normal Mode, Power Mode and Self-drilling Screw Mode, the WH18DBDL2 has yet another another party piece up its sleeve - a triple-hammer design which feature three strikers rather than the traditional two strikers impact drivers.

Hitachi claims that the three impacts per rotation allows for better operator comfort through reduced vibration as well as less slippage from the screw head - especially useful for Philips screw heads which has a greater tendency to cam-out. The WH18DBDL2 however will default to 1.5 impacts per rotation in Power Mode only - the increased interval basically gives the smaller striker more acceleration time and hence, more energy.

How does it stack up then?

In our test on a variator and clutch assembly torqued down to 80Nm, we were only able to get one 19mm nut loose via a Horusdy 1/4-inch-hex-to-1/2-inch-square adaptor and a 19mm socket. The other one was stuck, even after we ran it until the WH18DBDL2 cut-out due to thermal protection.

Hitachi Malaysia however demonstrated this particularly WH18DBDL2 unit had no problems loosening bolts torqued down to 200Nm, so we figured that it's either the nut must've either self-tightened overtime, seized from cold-welding or even the 1/4-inch-hex-to-1/2-inch-square adaptor flexing. Whatever it was, it did prove that the WH18DBDL2 was fairly comfortable even when it hammering away in Power Mode.

To be fair, the WH18DBDL2 was never meant to be an impact wrench, if you're looking for an IP56-rated impact wrench, then a more practical solution would be the WR18DBDL2 with 305Nm tightening torque. For everything else the WH18DBDL2 was designed for, it does very well. It makes short work of just about any self-tapping screws in wood, so much so it's scarily fast. We had mixed results in Self-drilling Screw Mode where the WH18DBDL2 is suppose to stop once the screw is tightened down but doesn't always stop especially in softer wood.